Shaw has the capacity to design and construct major irrigation schemes delivering up to 45ML per day of water to farmers during peak irrigating times.

Shaw has delivered a significant number of the major irrigation schemes that have been developed over recent years by the Tasmanian Government as priority infrastructure for the State. The Shaw team has the capacity to work effectively with clients and key stakeholders to ensure all project outcomes are identified and delivered to all expectations. 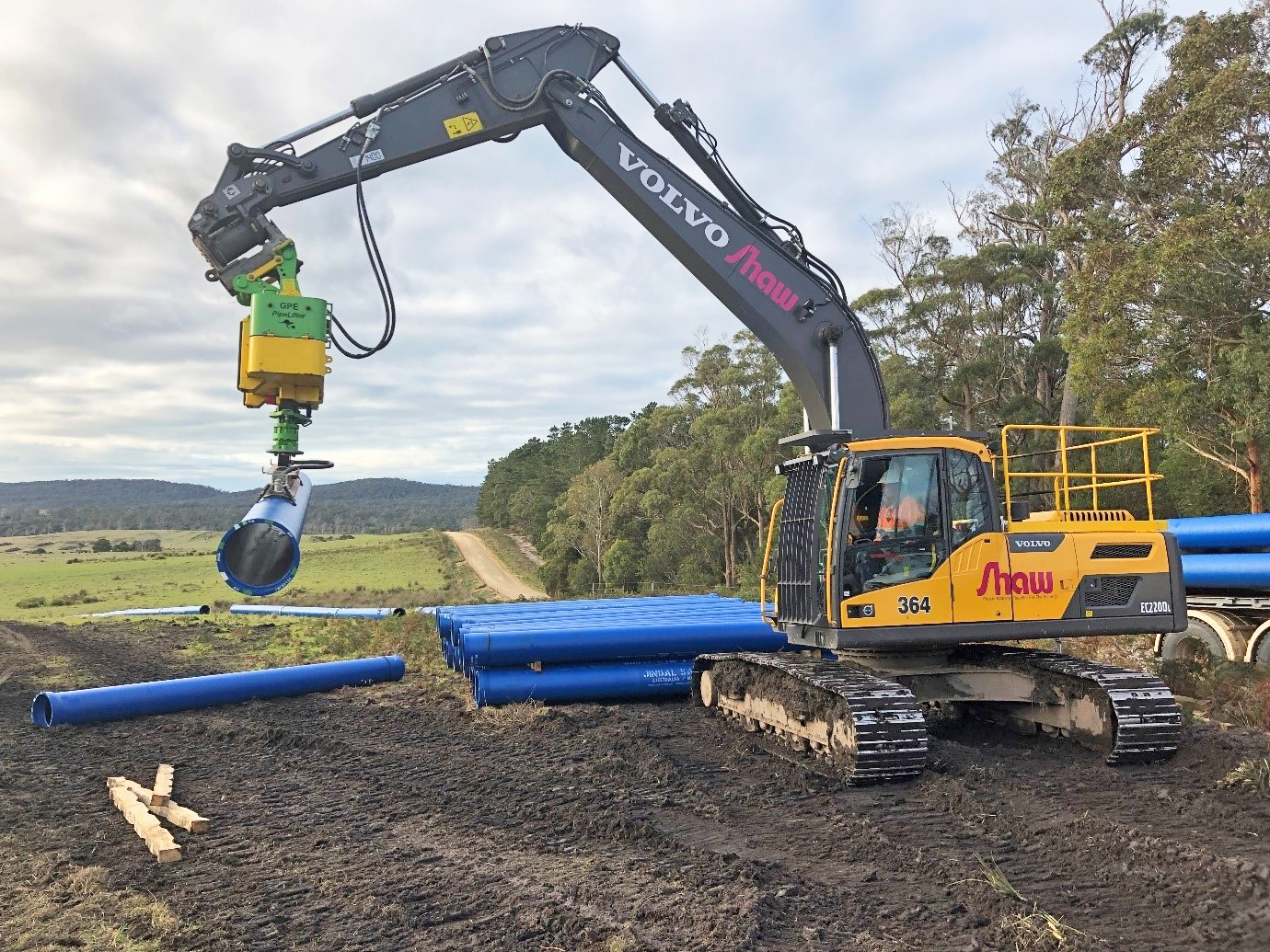 There was 16.8km of DICL pipes in varying diameters 750mm, 500mm, 450mm, 375mm, 200mm and 150mm. DICL pipe was chosen for high pressure section of the pipeline. DICL pipe was all rubber ring jointed pipe. The dig lay was through farmland, forest areas and areas containing endangered flora and fauna.

Due to the high pressure all changes in direction required significant concrete structure for bends, sockets, bulkheads, valves and encased on major streams. This required ingenuity from Shaw to pour concrete in remote areas and engaged a sub-contractor to use concrete bowls on the back of tractors to cart from the nearest access point.

At the end of the project Shaw also provided VEC an experienced fit off crew to complete air/scour valves and property outlets.

Work was conducted through the Winter period. This required scheduling of work in accessible ground and limit activities to minimize ground impact and maintain access. Some areas of swamp required a combination of cording, container bases and gravel to maintain access.

Works were re-scheduled to stay out of a wedge tailed eagle sensitive area during breeding season. We crossed creeks that contained giant freshwater crayfish with a few being found and relocated as per the environmental license requirements.

Work was completed ahead of schedule with no adverse environmental impact. 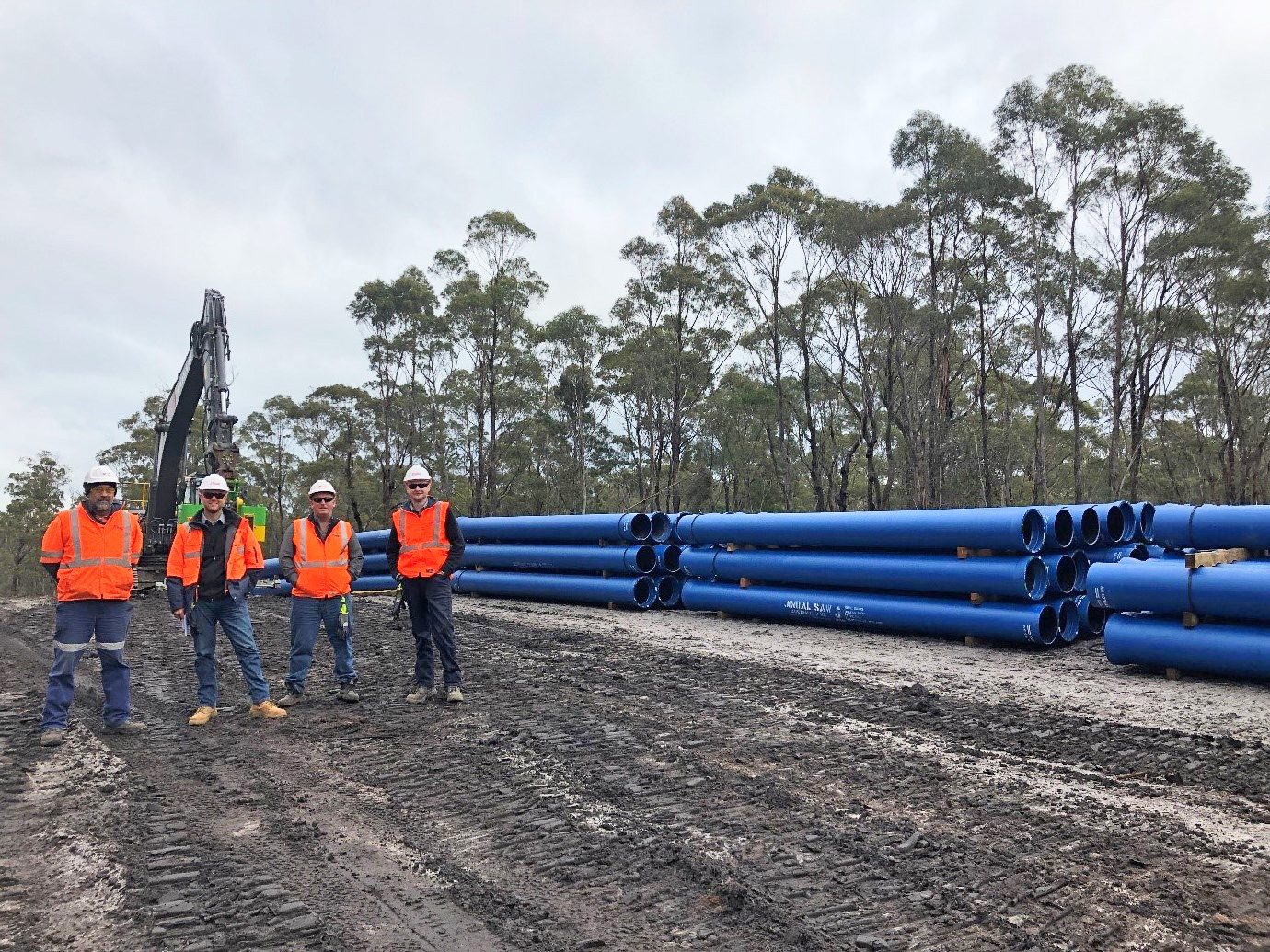 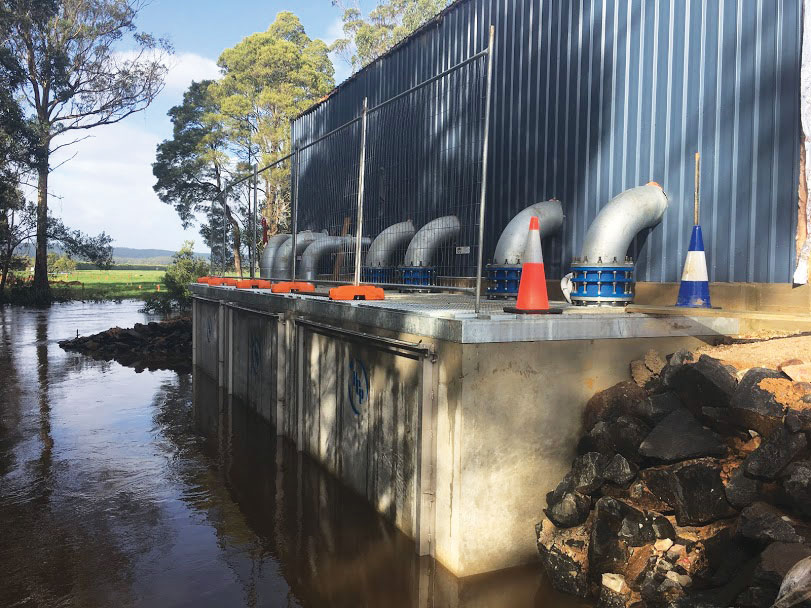 Design and construction of an irrigation scheme for use by 30 farmers in the Circular Head region of North West Tasmania. This included 60km of Poly Pipe ranging in size from 110mm to 800mm, two pump stations and two 500kL balance tanks.

The Duck Irrigation Scheme comprises two pump stations; the Edith Creek Pump Station and Smithton Pump Station. The Edith Creek Pump station is a dual purpose station situated 15km south of Smithton, it captures winter flows from the Duck River to fill the Mill Creek Dam, and releases the irrigation water back into the duck river during summer. The Smithton Pump station, located near the township, receives the irrigation water and transfers it along the two, more than 20km reticulation networks towards Forest and Mella areas.

The pipeline crossed over more than 50 different farms and required negotiating with many farmers with many different farm practices. The project required working around cropping times and cattle movements, detailed washdown and disinfection procedures, tight environmental constraints and a vast working area -  from end to end the pipeline was 40km long.

Many locations within the construction zone were through sensitive areas and required directional drilling of pipework, these included major river crossings, road crossings and crossing strategic drainage covered by the Mowbray Drainage trust. The Duck River crossing was completed using horizontal directional drilling and was a 120m path with a 10m incline through rock boring a 600mm hole. At the Edith Creek crossing a 355mm pipe was installed through rock 80m long.

The Duck Irrigation Scheme was the first scheme to include the installation of fibre optic the length of the scheme. This allows instantaneous management of flows and highly accurate tracking for water management. The fibre optic was installed in continuous lengths of up to 2km.

The majority of the works were completed through the summer of 2017/2018 with over 50 employees working to avoid the poor Circular Head winter weather conditions.

The pump stations were completed in time to collect the winter rains from Edith Creek to begin filling the Mill Creek Dam. The Duck Irrigation Scheme was completed and in use for the 2018-2019 summer. This allowed farmers to utilize their purchased water for cropping and cattle irrigation. 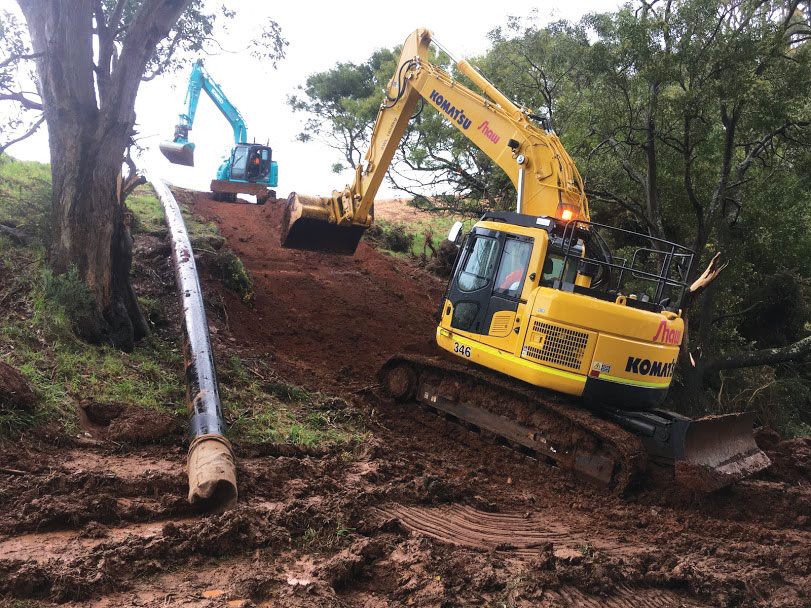 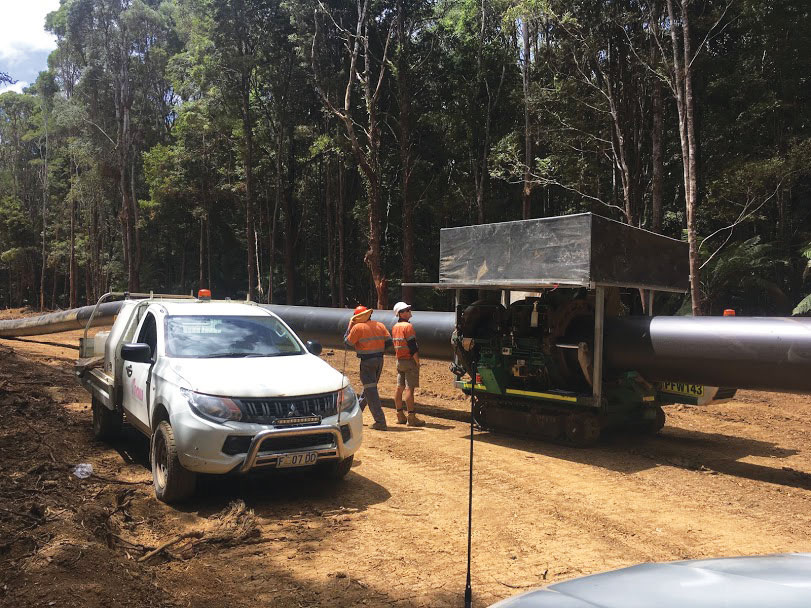 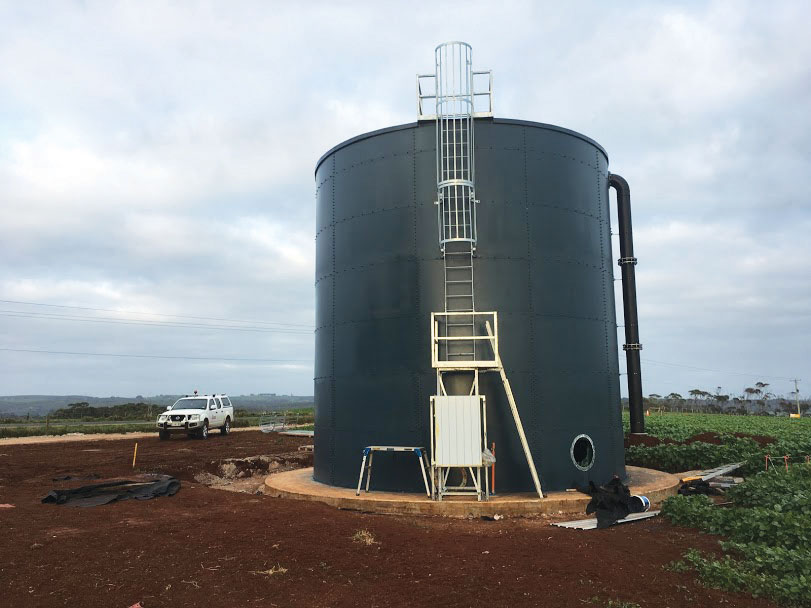 Shaw Contracting was awarded the $8.6million dollar Winnaleah Irrigation Scheme Augmentation (WISA) in June 2011.This design and construct project more than doubled the existing irrigation scheme through sourcing additional water from the existing Frome Dam, designing, installing and connecting approx. 11km of new pipeline from the dam and joining the existing scheme north east of the township of Winnaleah.

This project also involved the upgrading of the wave wall and outlet spillway at the Frome Dam.

The project experienced construction and environmental challenges; being completed in a remote area and subject to extreme weather changes but also offered scope for innovation and flexibility.

Originally, a 200m section of the pipeline was to be above ground as it skirted the rocky Moorina Hill; however changes to design and some careful blasting allowed this section to be buried also.

Heritage issues included running the pipeline 1.5km along the alignment of a disused rail corridor, and the protection of an historic grave site, which lay just metres from the dam wall, believed to be that of a worker who died during the dam construction in the early 1900’s.

Environmental challenges on the job ranged from land protection through to land rehabilitation and remediation, restoration and river protection whilst completing the pipeline river crossing.

This project was completed in time for the new, larger dam and reservoir to be filled by the winter rains ahead of the 2012 – 2013 growing season largely due to the team work and innovations of Shaw Contracting, enabling schedules to be met despite weather interruptions.

The completion of the augmentation extended the WISA capacity to 3,700ML and also extended its range by providing 4 additional branch lines from both the new pipeline and existing network, which greatly benefits the farming communities of Branxholm and Winnaleah. 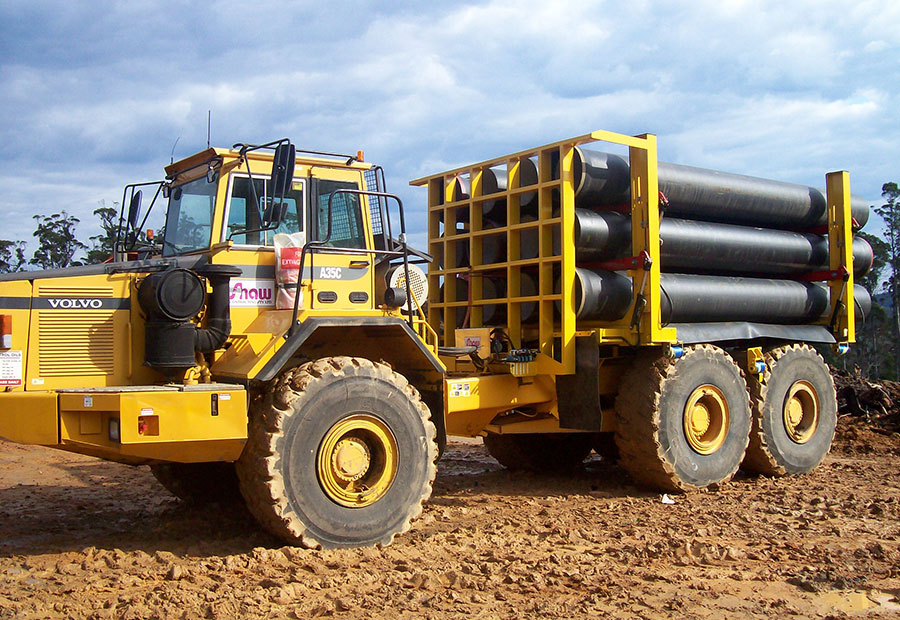 “Shaw Contracting worked well with Tasmanian Irrigation but has also worked well with the farmers as landowners. That interface is also extremely important, one that Shaw has managed well...” Design and Construction of a 4000ML storage dam, 2 pump stations and 42km of irrigation pipework from South Riana to Penguin on Tasmania’s North West Coast for Tasmanian Irrigation and 45 local farmers in the irrigation district.

Shaw Contracting worked closely with the design team to optimise the design for both the 18m high earth filled dam wall and the 42km of distribution network immediately after award of the contract to ensure that when works commenced the field staff had all the tools necessary to undertake the works in a continual progressive system.

With over 80 different properties to traverse, stakeholder management was paramount to Shaw to ensure continual works along the pipeline with no delays or disruption.

The construction period for the contract commenced in May 2014 and was due for completion in February 2015, which forced a considerable amount of the project to be completed over the winter months, including the construction of the dam wall in an existing waterway.

The dam wall was constructed and started catching water by September 2014 and was completed by December 2014 which enabled a large volume of water to be stored during the last quarter of 2014 enabling Shaw to undertake pipeline commissioning and delivery of water to some farmers late in the 2014-2015 irrigation season.

The final sections of distribution pipework were installed in February 2015 and the commissioning of the scheme was completed in March 2015 ready for delivery of water to farmers, as planned, late in the 2014-2015 irrigation seasons.

Shaw completed a total of 46 road and stream crossings on this project utilising directional drill technology with a single installation of 355mm pipe, 70m long under a swamp which considerably reduced the environmental impact on the project site.

The project involved 47,000 man-hours on site both LTI and MTI free which is a successful outcome from a project safety perspective. “A number of innovations in the contract have become new benchmarks for TI... The environmental performance has been to a level that also sets a benchmark for future projects”

This contract involved the design and construction of 12km of irrigation pipeline from the Meander River to the Rubicon River.

Pipe was designed to provide 45 mega litres per day to three watercourses and 12 farmer outlets.

“Critical success factors for the project were considerate management of landowners, quality of work and on-time completion and in all areas, Shaw Contracting exceeded expectations...” 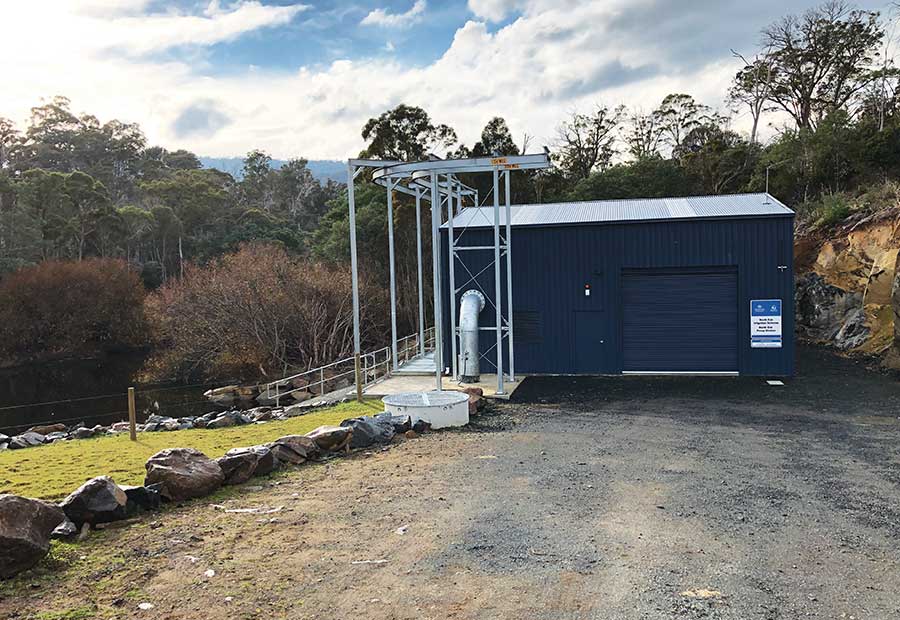 Shaw Contracting partnered with a local engineering design consultancy to perform the design. Shaw negotiated 85 separate landholder access agreements for access to properties as well as completing quality inspections on all facets of the project. Shaw organised logistics for the principal supplied HDPE pipe from the NW coast location in 20m lengths.

Commissioning consisted of flushing, pressure testing and performance testing. This was completed in conjunction with the designers to ensure compliance with the tight performance specification.

All works were coordinated and managed by Shaw Contracting Project Manager and Project Engineers.

The project provided successful outcomes to the principal. The pump station and pipeline were completed into Rocklands Dam with sufficient time for a partial fill of the dam. The distribution pipeline was constructed, tested and commissioned ready for a full irrigation season for irrigators who required water in the first season. 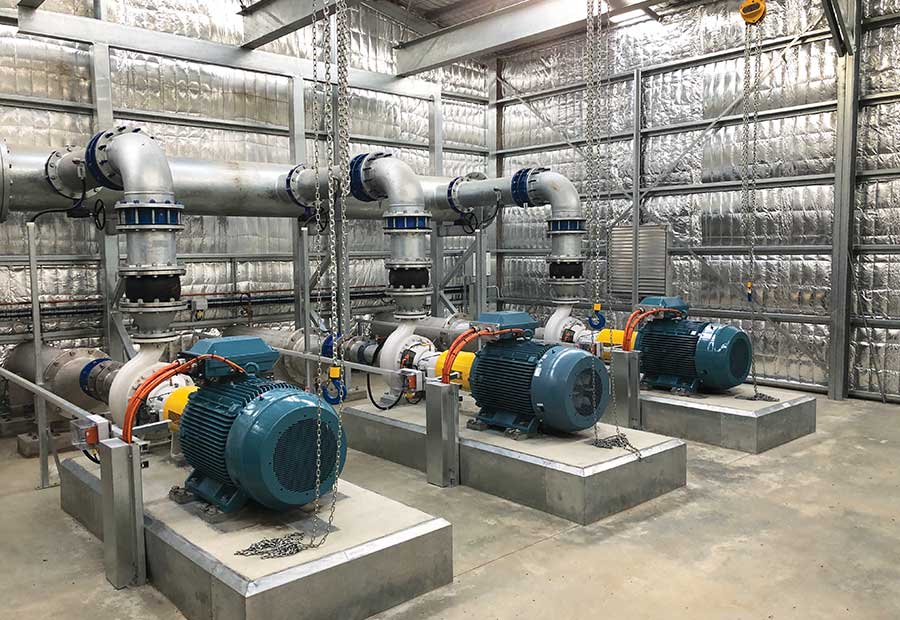